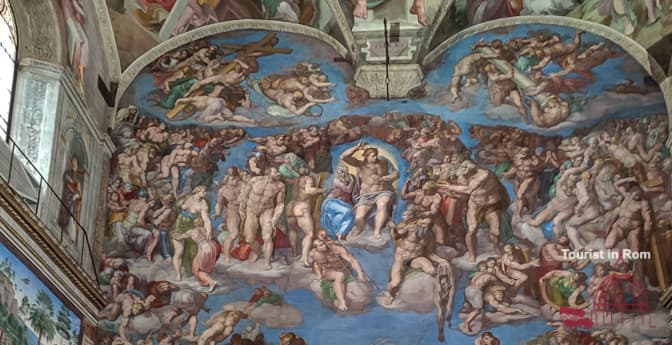 The Sistine Chapel is one of the most famous art treasures in the Vatican. It is famous for the frescoes by Michelangelo on the ceiling and the back of the chapel. In it the conclave, the election of the popes, takes place.

The Sistine Chapel is located in the Apostolic Palace, right next to St. Peter’s Basilica.

The chapel and rooms of previous popes belong to the Vatican Museums. Even if you only want to visit the Sistine Chapel, you have to buy the entrance ticket to the museums online.

Due to the current situation, the opening times are only announced at short notice. You can find current information in our monthly overviews.

Since online reservation is required anyway, you will find out your entry time with the reservation. Last entry is possible two hours before the museums close.

All entrance tickets to the Vatican Museums allow entry to the Sistine Chapel. Due to the Corona precautionary measures you have to reserve the entrance online and you have to show up on time at the booked time.

There is a temperature measurement at the entrance to the museums. The limit is 37.4° C. Masks are compulsory in museums.

The rules for sacred sites apply: shoulders and knees must be covered. Beach sandals and hats are not allowed.

The Sistine Chapel is a consecrated site. You can feel a very special atmosphere in this world-famous work of art. Loud speaking and photography are prohibited. Since the chapel is often full of visitors, it would otherwise be very chaotic.

The best time to visit is early in the morning or late afternoon before closing.

After the museums opened, some visitors sped right up to the chapel to be the first to enter.

If you just want to whiz into the Sistine Chapel, book simply the ticket to the Vatican Museums. Guided tours usually last 3 hours and cover many other areas of the museums.

On some tours you can use a special passage to St. Peter’s Basilica. That saves a lot of time. However, the passage is currently closed due to the Coronavirus.

Early entry before the museums open is very exclusive. You are then almost alone in the museums and the Sistine Chapel. In summer there is also a night opening on Friday and Saturday. You can also combine a visit to the museums with a tour of the gardens.

The free tickets are available at the entrance.

Tickets at a glance The way to the Sistine Chapel

The short path leads directly through the Gallery of Candlesticks, the Gallery of Tapestries, the Gallery of Maps and Pius V’s Apartment to the Chapel. On the long walk you will first visit the courtyard of the pine cone and some museums before climbing up to the galleries. In addition, after Pius V’s apartment you don’t go straight to the chapel, but first visit various halls in the Apostolic Palace, the rooms painted by Raphael and the Borgia apartment.

The name of the Sistine Chapel

Sixtus IV increased the power and lands of his family and allies and did not shrink from murder in order to achieve his goals. You may know him from the film trilogy “The Medici” as an opponent of Lorenzo il Magnifico. He supported the Pazzi conspiracy against the Medici in Florence and plotted against the Duca of Ferrara in the salt war. In the film trilogy about the Medici, he is portrayed as a religious church dignitary with a flowing beard. That probably doesn’t correspond to his historical picture.

A papal chapel, the Cappella Magna, already stood here in the Middle Ages. It served as a splendid setting for the celebrations of the papal court to impress the participants. Cardinals, bishops, diplomats, patriarchs, princes and other important personalities attended the ceremonies.

Like the old St. Peter’s Basilica, the chapel was in poor condition in the 15th century. In the years 1309-1377 the Popes were in exile in Avignon because Rome was too insecure because of the disputes among the Roman nobility. The buildings on Vatican Hill were falling into disrepair.

The Sistine Chapel was built between 1477 and 1480 by order of Sixtus IV on the remains of the medieval chapel. It was built on the old foundations and the old walls were preserved until the first section.

However, the foundations gave way sometimes and dangerous cracks appeared in the walls and ceiling.

Ceiling: lowered barrel vault with stitch caps that form the lunettes above the windows

16 panels were designed above the first section, which should appear like a view from windows. The Umbrian artist Pietro Perugino, who had already painted a chapel in the old St. Peter’s Basilica, received the first commission. He painted a total of 5 panels, two of them behind the altar.

In order to reconcile the minds, Lorenzo il Magnifico offered the Pope to send him his best artists as ambassadors of beauty. Pope Sixtus could not refuse the offer and so in 1481 Sandro Botticelli, Cosimo Rosselli and Domenico Ghirlandaio and their colleagues got to work. They made the other 11 panels. Curtains were painted under the panels – later tapestries were hung – above the panels portraits of the popes.

The tapestries were commissioned by Pope Leo X and were produced in the years 1515-1519. They were designed by Raffaello Sanzio, who had to draw reversed pictures on boards as pattern for the weaving mill. The carpets were then woven in Brussels. Their theme is the life of Saints Peter and Paul. Today they are kept in the art gallery of the museums.

The works of Perugino behind the altar were destroyed and today there is the fresco by Michelangelo Il Giudizio Universale – the Last Judgment. To the right of the altar is the story of Christ, to the left is the story of Moses. Opposite the altar is the main entrance that leads to the Sala Regia. It is used for official receptions. Above the entrance you can see the resurrection of Christ and the dispute over the body of Moses.

The works of Michelangelo in the Sistine Chapel

At the time of Sixtus IV, a starry sky was painted on the ceiling. It was destroyed by dangerous cracks in 1504 after the foundations gave way.

Sixtus IV’s nephew, Pope Julius II, commissioned Michelangelo Buonarotti to paint the ceiling again. Michelangelo had split up with Julius II because he had commissioned him to erect his tomb in 1505 and then withdrew the commission. The tomb was only finished in 1545 after Julius’ death and he was never buried there. The empty tomb with the famous Moses with the horns is located in the Basilica of San Pietro in Vincoli.

Michelangelo long resisted the commission for the frescoes on the ceiling of the Sistine Chapel. But eventually he had to give in. It took him around 4 years from 1508 to 1512 for the 500 square meter. He certainly got athletic arms because he had to paint the ceiling while lying on his back. In order for the figures to be clearly visible from the floor, he had to draw them larger than life.

The theme of the work is the creation of the world and man. The Hebrew prophets and the pagan sibyls testify to the providence of Christ and thus create an arc between the Old and New Testaments. The focus is on the creation of Adam by God. An image that has been reproduced million times.

After Julius II, the 2nd son of Lorenzo il Magnifico came to power, Pope Leone X, and after him Adriano VI from Utrecht. He was followed by Clement VII, Lorenzo’s nephew, whose father was murdered in the Pazzi conspiracy supported by Sixtus IV.

Clement had the picture of Sixtus IV painted by Perugino knocked off and commissioned Michelangelo to paint the Last Judgment in 1534. However, he did not see the start of the work. Paolo III of the Farnese family continued the project and Michelangelo got to work in 1536. Michelangelo worked on the fresco alone for 5 years and on All Saints Day in 1541 the work was presented to the public. The work is the source of numerous legends and interpretations to this day.

It shows the end of all time, the resurrection of the dead and Christ as judge with Mary, the ascent of the blessed and the descent of the damned.

Dust, incense and candles have damaged the paintings in abundance over the centuries and there have been repeated restorations. On January 21, 1564, the Council of Trento decided to cover up all obscene representations and Daniele da Volterra was commissioned as “pants painter”.

The last restoration lasted 14 years until 1994 and was arguably the most thorough. Sponsors were the Japanese television NTV, the Wethersfield Institute, Texas Instruments and the Enciclopedia Italiana. All layers of dirt were removed and the painted pants were also removed as far as possible. In some cases, however, the trouser painters simply chipped off the bare areas and painted the trousers onto new plaster.

The cleaning resulted in surprisingly bright colors. The only doubt about the work is whether or not Michelangelo himself used smoke to create depth in the painting. This layer would then also have been removed.

The conclave: the election of the Pope

There was a lot of haggling over the position of Pope. Important families, princes and kings tried to influence the election. The longest papal election in history, which lasted in Viterbo, 80 km north of Rome, from the winter of 1268 to September 1, 1271, led to the introduction of the conclave. Unable to come to an agreement, the 19 cardinals were locked in after 19 months and the roof was covered to force them to make a decision.