See the Trevi Fountain and … enjoy. This grandiose spectacle, a fountain the size of a swimming pool. The rushing of the water that is transported from the millennia-old Virgo aqueduct to the Martian field. The great staging of the ocean. Let yourself be surprised. 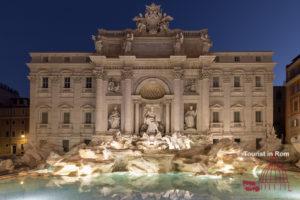 You will surely be surprised when you arrive at the Trevi Fountain. You stroll through small alleys and suddenly this huge fountain appears in front of you. You may have heard the sound of the water just before arriving.

This imposing fountain is the largest fountain in Rome. Children used to go swimming in the fountain in summer. Today it is strictly forbidden to even put your foot inside. There are high penalties.

How to get to the Trevi Fountain

The Trevi Fountain is located on the Mars Field, today’s city center of Rome. The position is somewhat hidden between the Quirinal Hill and Via del Tritone in Piazza di Trevi

Our description of the center of Rome gives you a good orientation.

Read our City tour in Rome center with our suggestions for a walk from Piazza Navona to the Spanish Steps. 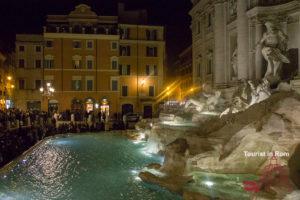 The name of the Trevi Fountain 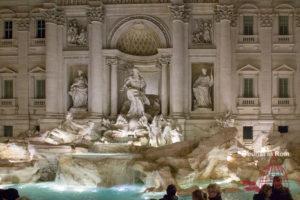 There are many hypotheses about the name of the Trevi Fountain. The name probably has an ancient origin.

One hypothesis is that three streets came together in the district, “Tre Vie”.

Another theory is that the place where the water is collected was once called Trebium.

Perhaps the name derives from the fact that the aqueduct fed three water points on Via del Corso.

Our favorite story is that a virgin named Trivia showed the general and master builder Marco Agrippa the water source.

The aqueduct is called Aqua Virgo, the virgin water, and has been in operation for over 2,000 years. It was built in 19 BC. and dedicated to supply the thermal baths of Agrippa on the Martian field. The aqueduct, which is around 20 km long, runs underground for most of the way. You can see it in the basement of the noble department store La Rinascente in Via del Tritone.

Description of the Trevi Fountain 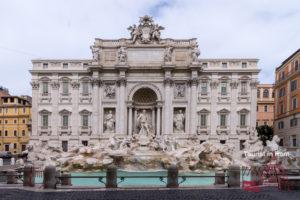 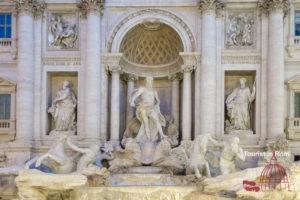 The theme of the fountain is the ocean. In the lower part a rocky coast is shown, on which four columns are placed. The god Oceanus or Neptune stands on a shell in the niche between the two central columns of the fountain. Winged horses pull the shell and are held by tritons. The left horse is wild and the right horse is calm, which represents the calmness and wildness of the ocean. The statue on the left side of Oceanus stands for abundance, the statue on his right side for fertility. Above the abundance is a relief depicting Agrippa approving the Virgo aqueduct project. There is a relief above the fertility with the Virgin Trivia, which shows the soldiers the source of the aqueduct. Various plants are also shown, such as ivy, oak, grapes and figs. 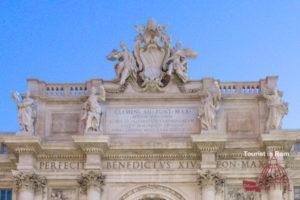 Four Corinthian columns frame the fountain. On them, from left to right, are figures with the following meanings:

Between the two central figures it says: “In the year of the Lord 1735, the sixth of his pontificate, Clement XII adorned the virgin aqueduct, which is known for its abundance and health, with a wonderful work.”

The most famous practice at the Trevi Fountain is to throw a coin over the shoulder into the fountain. You are doing a good thing! The coins benefit the Roman Caritas, which supports people in need in Rome. With the flip of the coin, you wish to return to Rome. You will see, it works. Its magical! If you throw in several coins, it will bring you luck.

Another old custom concerns lovers. On the right side of the Trevi Fountain you can find the Fountain of Love. Drinking the water will make you stay together forever.

History of the Trevi Fountain 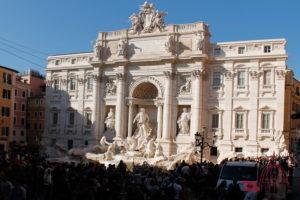 The source of the Aqua Virgo is particularly pure and low in lime. That is the reason why this aqueduct has worked for over 2,000 years. If there was more lime in the water, it would not have been possible.

The aqueduct was used to supply drinking water to the Romans and fed wells at the Pincio, at the Spanish Square and on the Campus Martius. The first Trevi Fountain, with three tubs, is documented in 1410, but there may have been a watering hole here for a long time.

In 1453 Pope Nicholas V had the aqueduct repaired again and had the three tubs replaced by a rectangular tub. After a further renovation by Pope Pius IV, the aqueduct was inaugurated again in August 1570 under the name Acqua Vergine in Piazza di Trevi.

Around 1640 Pope Urban VIII, a Barberini, gave Gian Lorenzo Bernini the order to rebuild the square and the fountain. A wine tax was introduced to finance the project. Bernini had some buildings torn down and gave the square its current shape. However, the money was not enough and the project died in 1644 with the death of Pope Urban. Bernini was commissioned to extend the aqueduct to Piazza Navona. The palace of the new Pope Innocent X, a Pamphili, and the Fountain of the Four Rivers (Fontana dei Quattro Fiumi) built by Bernini are located there.

In 1732 Pope Clement XII commissioned Nicola Salvi. Neither Clement nor Salvi got to see the completion of the fountain. Clement died in 1740 and Salvi in 1751. But at least Salvi had two inaugurations, one by Clement XII in 1735 and one by Benedict XIV in 1744. Construction work was interrupted several times, mostly because the fountain was becoming more and more expensive. The fountain was finally completed by Pietro Bracci in 1762. Pope Clement XIII inaugurated it for the third time on May 22, 1762.

The last major restoration was carried out by the Fendi fashion house between 2014 and 2015 for 17 months. The inauguration took place on November 3, 2015. In July 2016, Fendi celebrated 90 years with a large fashion show in the Trevi Fountain.

Anita Ekberg and Marcello Mastroianni in the Trevi Fountain

One of the most famous scenes in film history at the Trevi Fountain is how Anita Ekberg lures Marcello Mastroianni into the fountain. See how easily Anita climbs into the fountain and splashes around in the water.

The filming was done in late March 1959 and the water was freezing cold.

It is said that Anita didn’t mind and she could stay in the well for several hours. Marcello, on the other hand, had to put on diving equipment under the suit and drink a bottle of vodka before venturing into the water. He was totally drunk while filming. Although if you look at the film like this, Anita might have lifted a few glasses as well. Na sdorowje!